Fermented teas have their origins in East Asia, but Kombucha – an antioxidant and probiotic-packed beverage said to be good for the digestive system – has yet to go mainstream here, though it has become very popular in the West.

One place trying hard to help Taiwanese develop a taste for Kombucha is vegan restaurant Flourish (No. 32, Lane 233, Dunhua South Road, Sec. 1), part of the Daohe Food and Beverage Group, where diners are greeted with a small cup to try before they sit down. A row of giant, cloth-stoppered jars filled with the fermenting pale brown tea dominate this lovely light-filled space located in the trendy East District near the Zhongxiao Dunhua MRT station.

Flourish’s manager, Chiou Pei-chian, says the aim in focusing on Kombucha is to offer local people a way to heal themselves after all the fried and sugary foods they tend to consume when they dine outside the home. “Kombucha can help clean them out after all that unhealthy food,” she says, lamenting that Taiwanese people’s sweet tooth means that many customers still find the drink too tart. 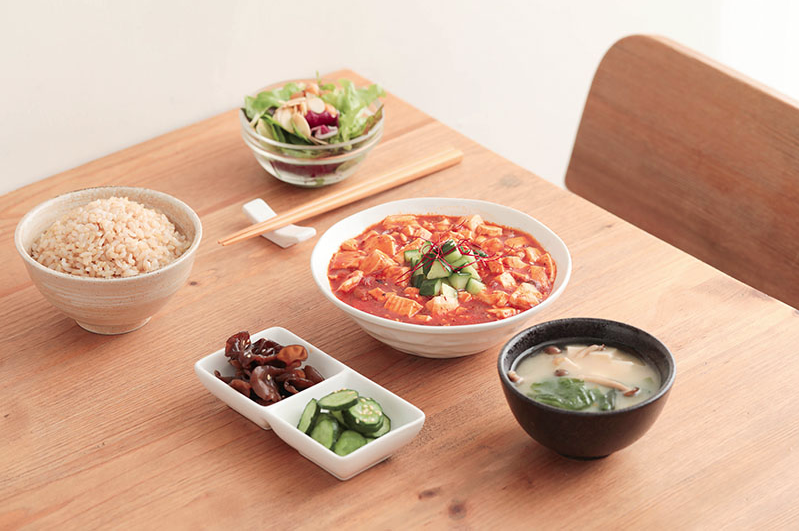 Flourish is also one of the few establishments offering gluten-free options. Many Westerners started shunning gluten – a protein found in wheat and several other grains but not rice – after some medical studies showed an association between the consumption of gluten and gut inflammation and immune disorders.

Flourish’s gluten-free desserts, which include delectable-looking mousse, tiramisu, roasted brown-rice pudding, brownies, and cupcakes, employ rice flour instead of wheat. I’m offered the lemon pineapple cake (NT$140) – a soft, moist slice of sponge cake smothered in coconut cream. The gluten-free aspect wasn’t something the restaurant focused on originally, says Chiou, because not many people in Taiwan care about it. But in 2017, as more and more customers mentioned that they were sensitive to wheat, the kitchen switched to using brown-rice flour in its baked goods.

The company’s philosophy, says digital marketing manager Sara Luan, is to create clean, healthy food that is environmentally friendly and does not contribute to animal suffering. In line with that philosophy, in 2018 all of the Daohe brands, including Flourish and a string of Japanese restaurants and bakeries, went vegetarian or vegan in recognition that meat and dairy production is a major contributor to global warming. (According to the UN’s Food & Agriculture Organization, livestock are responsible for around 14.5% of global greenhouse-gas emissions.)

Concern about the environment also motivated Rose Lai, a former Greenpeace campaigner, when she opened her Ketoer Café (5-1 Fuzhou Street) in 2018. She wanted to promote the idea of rejecting disposable plastics – and if you come looking for a coffee to go, you’d better bring your own cup or else you’ll have to rent one from her. But she knew that environmental friendliness wouldn’t be enough to bring customers through the door.

At the time, Lai was researching ketogenic (low-carb, high-fat) diets because her mother had been prescribed the diet by her doctor. Initially skeptical, she soon became convinced that ditching carbs brings many advantages. “We all eat too many carbohydrates, but it’s not good for our bodies,” Lai says. “It can lead to diseases like diabetes and cancer.”

Out of that research came the main concept for her café – keto-friendly food and drinks. Ketoer, a cozy nook painted green and blue, is located between the Chiang Kai-Shek Memorial and Guting MRT stations – and has just three standalone tables. An oversized menu includes keto favorites such as “bulletproof coffee” (where the milk, which contains sugars, is swapped out for butter), salad bowls, and quiche made with almond flour. Each entry is given a calorie count and a breakdown of how many grams of fat, protein, and carbs it contains.

I ordered the Green Keto Smoothie Bowl (NT$200), which is made from blended avocado, kale, and almond milk, topped with chia seeds, blueberries, chopped nuts, and two rows of tiny, star-like white and pink flowers. The rich, buttery taste of the avocado jostled with the crunchy seeds and nuts. It was the kind of meal that makes you feel cleansed after you finish.

While awareness about keto is not as high in Taiwan as it is overseas, people are gradually learning more about it, Lai says. It’s a diet that is challenging to sell here because rice and noodles dominate local dining options. Still, other keto outlets besides Ketoer have begun popping up around the city, including Sweet Cooking, situated off of Yongkang Street, and Ketoneversion near the Taipei City Hall MRT stop.

Chuan Lee, the man behind Ketoneversion, said he was inspired to open his restaurant after he lost 30 kilograms in a matter of months due to going keto a few years ago.

Lee said that the trick to satisfying local people, who expect to have a staple in their meal, is to use alternatives rather than just providing proteins and fats. “We use cauliflower rice instead of rice, konjac noodles instead of noodles,” he says. “With a staple food, you can have a good dining experience, and the ketogenic diet becomes easy.”